and it’s been on my list of things that I wanted to make ever since.  Not because we love caramel sauce so much, because I haven’t even bought ready-made caramel topping in the last couple of years.  I just found it fascinating that you could turn a can of sweetened condensed milk into this awesome caramel sauce.

I have a long list of “just because” ideas. Just because I want to see for myself if it works. Has that ever happened to you?

And now that I have made it, I am hooked!

Seriously, this stuff is super easy to make and there are so many ways to use this sauce to make several tasty desserts. Sure hope Hubby likes Caramel Sauce!

Caramel Sauce Made With Condensed Milk

All you need in the way of supplies & ingredients: 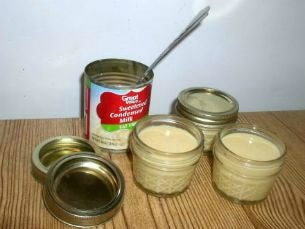 Don’t open the lid.  Every time you open the lid, you need to add about 30 minutes of cooking time. I tried shining a flashlight into the crock lid to see if the milk was changing colors to no avail.  It was driving me crazy! 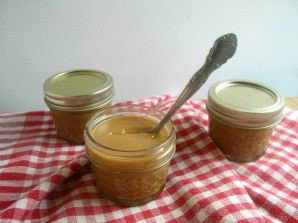 After three and a half hours, check to see if the milk in the jars is caramel-looking. If not, return the jar to the water, put the lid on the slow cooker and cook on HIGH another 30 minutes. Mine was a little over-cooked above, (because I DID open the lid and it actually cooked 4 hours and 10 minutes) and it didn’t affect the taste one little bit! Just saying.

When the color is about the right shade for caramel, carefully remove the jars, set them on a folded dry dish towel and cover with another dish towel to allow them to cool  slowly. If you don’t have a jar lifter, carefully dip water out of the slow cooker until you can easily pick up the jars.

After the jars are totally cool, store them in the refrigerator for up to a month. Homemade caramel sauce is not acid enough to make a shelf stable  product.

How to Use Your Delicious Caramel Sauce 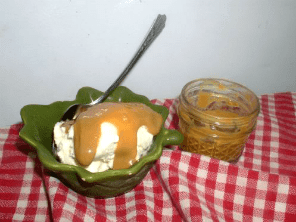 If you want to warm up the sauce, spoon some into a bowl and microwave in 10 second intervals, two or three times, stirring each time.  If it is too thick, add 1 or 2 teaspoons of milk and stir until fully mixed into the caramel. Add a tiny bit more milk if needed. The bowl needs to be  large enough that the caramel sauce will not boil over. Trust me it’s a mess!

This would be fun to make with the kids and call it “Magic Caramel Sauce”!

Oh, my! I think I need to make another batch, too!