It’s been a busy week for me in the garden. I added a few more containers, filling them from the compost pile, and worked on cleaning up my greenhouse area. The container plants are coming along very well and are slowly producing. More on that in a few…

Hubby trapped and relocated Pepé Le Pew last week. A couple of days later, from the kitchen window, I saw another skunk literally glide across the field. I never know what I’ll see out the window while washing dishes.

While on one of my morning walk around the container garden a few days ago, I was totally surprised to see a 6 or 7″ hole dug in the cucumber container, and the poor little plant broke off at the soil level. I immediately thought the skunk was responsible, since I had caught a faint whiff of it’s not so delightful odor out the back door one night.

Hubby set the trap that night, and lo and behold, by the next morning we caught the little culprit. Not sure what it was digging for, but it spread soil all over the container surface. It looked to be about 6 months old and it was sure a pretty little thing. We tried feeding it and making friends, since we are pet-less at this time. All was well and good, as long as the cage was closed. But when the door was opened, that cat was gone like the wind!

After being trapped two nights in a row, we haven’t seen it since.

I labeled most of the containers in the photos for easy reference. Everything has been watered well and mulched. What few little weeds that popped up were pulled.

Everything that needs a cage has one, except for the new tomatoes in the white buckets. Those will be installed when the plants get a little bigger.

Looking good, if I say so myself! I’m really pleased I got the greenhouse area straighten up, as I’m hoping to put the cover on the greenhouse this fall. I’m really excited about be able to garden this summer, because I barely came outside last year.

The two white containers above had previously been cut for something else. We used them ‘as is’ for sweet potatoes, except Hubby had to drill a couple of drain holes.

The Zucchini are finally getting some buds. 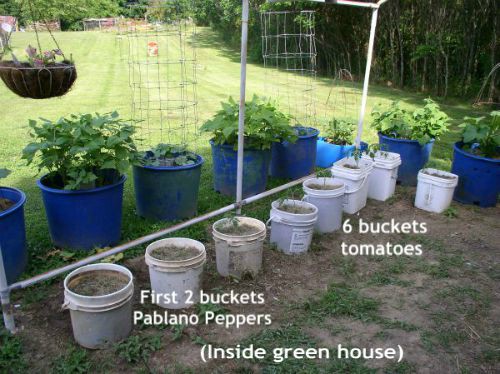 The Pablano peppers were extras I started and the tomatoes were volunteers. I couldn’t bring myself to compost them.

The cat got in the first container on the left.  I put the little broken cucumber plant in water and within 3 days it had rooted and was replanted.

Cucumbers and tomatoes are starting to get some size and have started producing. I removed the bottom leaves on these and the peppers below, to help prevent soil borne diseases splashing up on the leaves. The mulch is also good as a preventive measure.

The smaller pepper plants should be catching up in size to the larger ones in a few more weeks. But it’s okay if they grow a little slower. That just means a longer harvest period! For location reference, there is about a 3′ walkway between the tomatoes along the side of the green shed and the back of the fence behind these pepper plants.

I had a couple of extra red cherry tomatoes, so I planted them in a bucket under the ladder. The Black-eyed Susans are the plant that grows 18″-24″, and not the vining variety.

Blackberries are weeded, mulched and landscape timber put down in front. Tons of berries on the canes! Yay!

Herbs are starting to grow. I’ll label them next week and tell you about the Romaine lettuce in the top left box.

I had an extra unused barrel in my garden junk pile. Hubby cut it in half and drilled a couple of drain holes. I have a couple of more sweet potato plants to put in them after I get them filled.

The other extra red cherry tomato seedlings were planted two each in with the zucchini and squash. I know that’s a lot of cherry tomatoes, but I’m sure we will use them up in various ways.

The bell pepper plants are filling out and have started producing peppers. I think there was 4 or 5 almost tennis ball size when I looked yesterday.

There’s a couple of little yellow straight neck squash, three Pablano peppers that are almost big enough to pick, several golf-ball size tomatoes, and a bunch of cucumbers 1″ to 3″.

It won’t be long now and we’ll be eating fresh-from-the-garden vegetables.

Next week I will take wider view photos, so you can see how everything is set up in relation to other containers.

This blog is not just a gardening blog. It’s just that getting the garden going is a major project for me at this time. Once set up, it takes minimal effort each spring to prepare for the growing season. It’s also an opportunity for me to show that gardening in containers is perfect for both seniors and those with disabilities.

Now that everything is pretty much set up, I can get back to also sharing some recipes, crafts and other things that I think you will like.

How does your garden grow?