The container garden is doing wonderful! It’s nice to finally get most everything planted and growing well. We’ve had temperatures in the upper 80’s and low 90’s the past few days, and forecast for the next couple of days, with heat index over 100°. So…I am really surprised at how everything has grown as much as it has AND with lots of blooms! On the other hand, I’m not handling the heat well.

How does my garden grow?

I’m just going to do a quick run through of what’s happening in the containers. For additional reference of what’s planted in each container, go to Week 6 Update.

There are a few baby yellow squash and finally some baby zucchini. The Contender Green Beans are now producing, but not quite ready to harvest. The Italian Flat Green Beans are blooming. The mini-cantaloupe are starting to climb the cage. 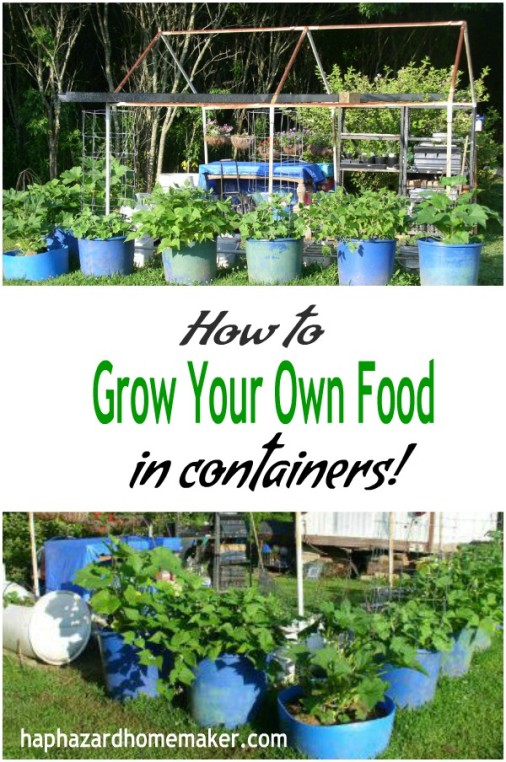 The sweet potatoes have settled in and started growing. In spite of being dug up one night by a critter in the night.

Look at those cucumbers! We have already harvested 8 cucumbers this week off the two middle containers below left. The other cucumber plants on the far left are catching up after being dug up. The red cherry tomatoes on the right of the cucumbers have shot up!

The picture on the right below are the tomatoes. Lots of blooms and lots of tomatoes already growing. Can’t wait for a couple to get big enough to fry.

The hot peppers in front of the fence below are growing and producing really well! We have already picked a bunch of jalapenos and a couple of small pablano peppers.

I plant three pepper plants in each container. The large plants below are transplants I bought. I filled in with pablano seedlings that I had started. They are still pretty small, but have almost doubled in size from last week. 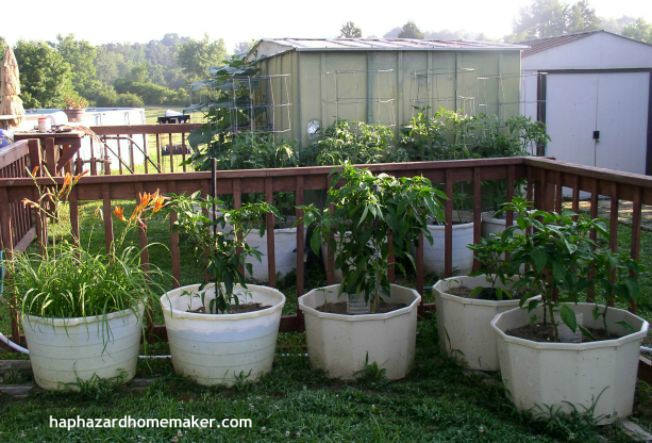 It seems to be working with growing the yellow squash and zucchini upright. Yellow Cherry tomatoes grew quite a bit this past week. There are two cherry tomatoes behind each squash plant. Figured by the time the squash bugs wiped out the zucchini and yellow squash, that the tomatoes would be ready to start setting blossoms. 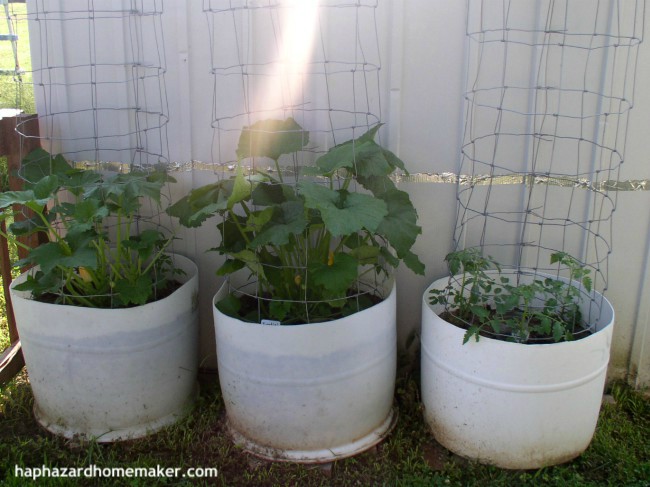 Bell peppers are doing well here. All of those small plants caught up with the one large bell pepper plant that I had bought first. Lots of tiny little bell peppers!

Not a lot to share here. This is the long wire basket hanging on the east side of the porch railing. The 10 pots of strawberries on the far end in the picture below are looking good, but I think it’s too late and too hot to produce now. It took a couple of weeks for them to recover from transplanting and we did get a few berries, but none recently. They are probably June-bearers.

There are also a few herbs, a pot of stevia, a small ginger plant, and a small begonia and coleus that I am nursing along in the foreground. 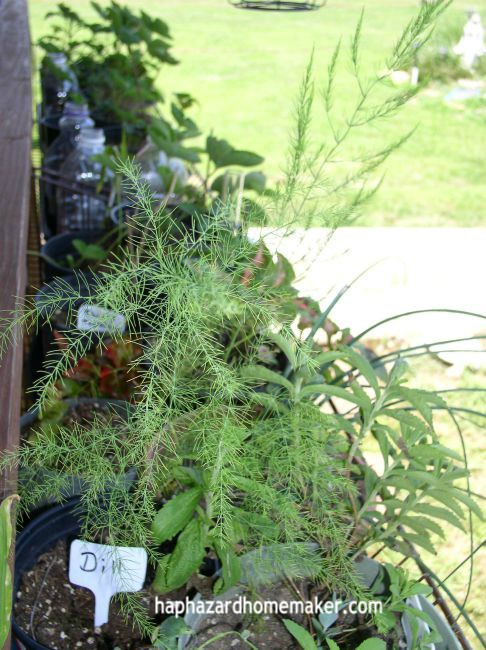 I wasn’t sure how the hanging herb pots were going to do here on the porch. We’re planning on putting a shelf along this wall, so maybe the herbs will do better, once they have a little more room to spread out and less heat from the roof. The heat is brutal on this hilltop with no trees to shade the house or porch until late afternoon.

I didn’t get to the herb shelves. Hopefully this next week… 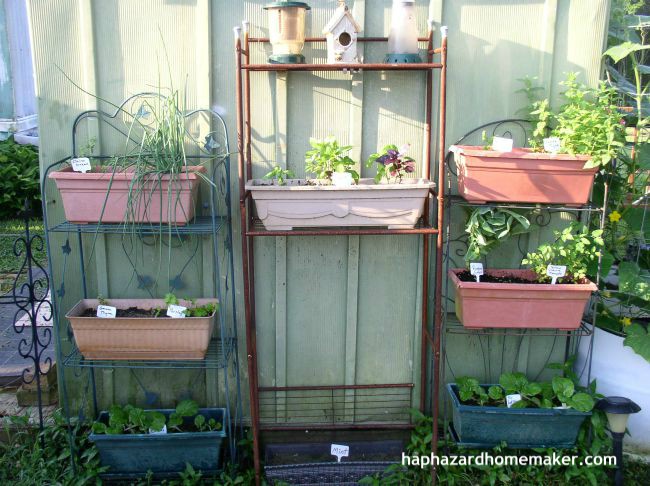 Apparently, I was mistaken about the skunk and the cat. Second night after the buckets were planted and set up, something got into the buckets and flung the soil everywhere, plus a few plants…two peppers and a tomato on the far end and the tomato in the bucket in the foreground. I refilled the buckets and replanted the peppers and tomatoes.

That evening I sprayed a 50/50 mix of ammonia and water all around the containers, while Hubby set both traps. The critter did not get into the buckets. However, it did have a nice meal of cat food without entering either of the cages. Apparently by reaching it’s scrawny little paws through the cage.

Hubby set the trap again before we went to bed and we woke up the next morning to find Rocky Raccoon sleeping in the cage.

He was relocated. It’s shame too, because they are so stinking cute!

If a critter gets near the containers tonight, he’s going to get his little hiney lit up, because as a precaution, Hubby set up the electric fence around the containers.

At the end of the week…

This is our best container garden yet. Hubby moved a lot of containers around this spring. Some for more sun exposure and some to make it easier to maintain. We haven’t harvested much yet, but I’m happy with how the garden is coming along! 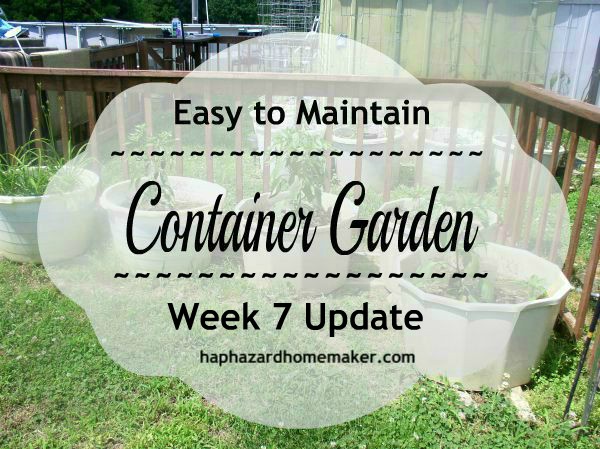 How does YOUR garden grow?