We had a nice little break in the weather last week, but it’s now back up in low 90’s with high humidity. The combination has been oppressive for me, so I have spent very little time outside. The heat has taken a toll on most of the container plants, too. We’re 3 1/2 months in on this garden season, but since I have taught container gardening classes in the past, and have been able to document what a container garden is capable of producing with little maintenance here, I’m pretty happy.

Most of the plants are still pretty green, but everything has a lost a bunch of leaves, so most look kind of spindly. I want to start a few fall crops, but I need a day of decent temperatures and lower humidity before I can spend any amount of time outside.

If you are new here and  want to know exactly what is in each container, I labeled each one in this post.

In case anyone was curious, that is an 8′ x 20′ office trailer we bought last year to make a combination guest house and craft studio. My potting area is on the back side.

Still going strong. Sure hope we get some good size sweet potatoes. This will be a good test as to which container is better, ie: the upright barrel or the horizontal barrel. I’m thinking it would be pretty nice to set up two barrels with a cattle panel between them, to make an arch for the vines to grow up and over. It would be a cool little garden house for kids too, or a small shade structure with a chair and small table for breaks in the garden.

Hmmm, my mind is working on plans for next year!

Instead of installing T-posts in the ground for the Florida Weave  I did a modified version on a sturdy re-purposed clothing rack. The rack was given to me years ago and I had already planned on using it in the green house next spring for hanging baskets. I put 2 buckets on each side, and one on each end, then used cotton clothes line rope to do the weaving. These tomatoes have some signs of Leaf Spot, but so far the plants are still dark green and lush.

I have a spare fence cage to use for the bucket of cherry tomatoes, just didn’t get to it yet.

Last week, I turned the end container with the zucchini, because it had gotten so big and was hanging over the electric fence. I used an upside down bucket to rest the branch on. This week I had to cut off the branch due to a squash vine borer.

Lost quite a few little yellow squash due to not being pollinated.

They didn’t produce much this week. I need to remove all of the bean plants, but haven’t gotten around to it.

Love these little Minnesota Midgets! They are sweet, juicy and absolutely delicious! The plants look really rough, mostly because they should have had at least one more watering than what they got. The two containers are producing more than enough to keep me happy.

Oh, yeah! Still lots of Pablanos growing on the plants. I’ve already put several gallon bags of peppers in the freezer, already prepped for recipes. And I made a Chile Relleno Casserole which was delicious!

I thought about pulling the cucumbers, because we only got a few this week. I may just plant a few seeds in the containers, and wait for them to start growing before removing the old plants. I’ll be happy if we continue to get 2 or 3 a week until then.

The only reason these tomatoes are still here is because they still have quite a few tomatoes on the vines. The upper growth looks beautiful. I’ve heard others locally say their tomatoes weren’t doing well either.

Even though the cherry tomato plant (2nd container from right in left side picture above) has very few leaves, it has huge cherry tomatoes! I love this variety, named “Large Red Cherry Tomatoes” and if I remember correctly, I found these seeds at Dollar General. 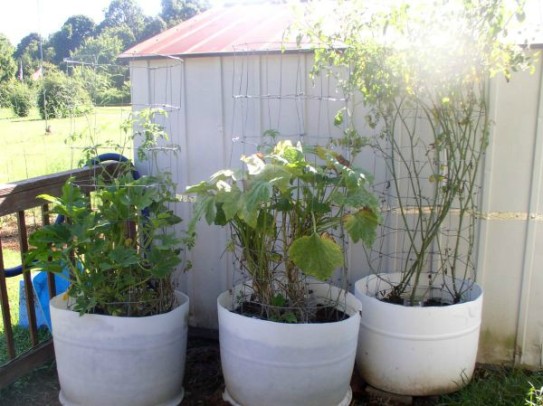 I removed a bunch of leaves to allow for more air flow because the squashes were showing signs of Powdery Mildew. It didn’t help. The plants should have been treated at the first sign, but I didn’t have anything on hand.

The squash bugs are getting pretty aggressive about laying eggs on all of the summer squash plants. I’m finding eggs on top of leaves, almost on top of other clusters on the underside and even on the stem of a zucchini.

I am continually amazed with the bell peppers. They are an excellent candidate for edible landscapes, where you mix vegetables plants in amongst your ornamental plants.

These plants are looking great, loaded with lot of peppers and blooms. I know I shouldn’t be planting them in the same spot every year, but they do so well here. Didn’t harvest many of these this week.

Did I mention in a previous post that bell peppers are loaded with Vitamin C? I’ll go into that more on a later post.

I’m hoping the temperatures will drop soon and start being more normal soon. I have several things I would like to do for both a fall garden and to put in place for next spring. The weather forecasters are calling for several days of rain in the next week or so, but that will probably all change.

Nothing like watching “corn” grow, eh? I know, right? But when I look back a few weeks, and see the difference, it’s pretty cool!

I appreciate you checking in for this week’s update. I’m going to skip next week, but will update again in two week.