I made a brilliant discovery one morning a couple of months ago…well, brilliant in my home anyway. An answer to a dilemma that I wasn’t actively trying to solve. I love how sometimes these ideas and discoveries come out of nowhere.

Hubby loves to start his day with breakfast. I don’t. I don’t sleep well, so I’m usually kind of grumpy. Or so Hubby says. I don’t like “un-embellished” eggs. And I’m not usually hungry when I first roll out of bed…for the last time each morning. If I am hungry, I’m good with cereal, Pop-Tarts, peanut butter & jelly sandwich, cheese & crackers, etc. Hubby would prefer a full course breakfast with traditional breakfast foods.

Pin this to read later

Not that I was particularly ambitious that particular morning, but I was bagging up some frozen diced peppers one morning, while I was browning a large package of breakfast sausage to make biscuits and gravy. I was planning on freezing the rest of the sausage in recipe size portions.

Do you remember this old Reese’s Peanut Butter Cup commercial?

That’s kind of how I felt about my brilliant idea. Yes, I said it…my brilliant idea! It wasn’t as cool as the chocolate and peanut butter combination, but it was a close second!

It came to me…why not make Omelet Packs with cooked sausage, bell peppers and onions. The peppers and onions were already frozen, so I just had to put the cooked and drained sausage on a flat baking sheet to freeze. Having the omelet packs available saves us a good 15 minutes of breakfast cooking time by not having to cook the sausage and cut up the peppers and onions. If we even have fresh peppers on hand. Cuts down on kitchen cleaning time too.

I put about 1/2 cup of frozen diced peppers and onions in a sandwich bag with a 1/2 cup of frozen cooked sausage, then put several little bags in a quart freezer bag. They were such a huge help that I made some up with ham the second time I made the sausage omelet packs. 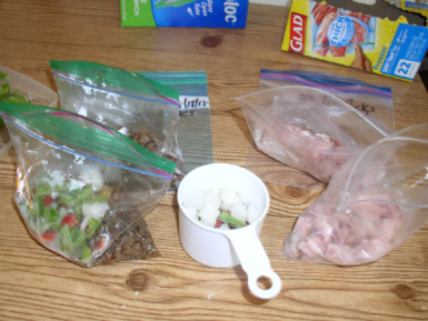 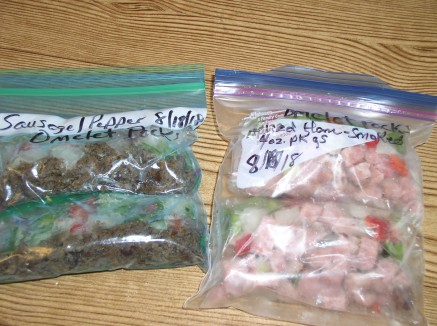 When it’s my turn to make breakfast, I’ll take an Omelet Pack out of the freezer as soon as I get up in the morning. A half-hour or hour later, I’ll dump the mostly thawed package in a skillet with a little oil and saute them for a few minutes. I’ll crack a couple of eggs into a jar I keep on the counter, add a dash of milk, and then shake, shake, shake. Pour it over the sausage mix in the skillet, and cook till the eggs are done. I usually cut the cooked egg mix into two halves, fold each of those in half, and then add some cheese to the top.

When the eggs are almost done, I’ll start the toaster. By the time cheese is melted, the toast is done and buttered.

They don’t have to be thawed. But the clock starts on my breakfast duty time when the omelet pack gets taken out of the freezer.

In five minutes, I can have a good homemade breakfast on the table and ready to eat. Sometimes the eggs go on the plate with maybe a couple of slices of tomatoes or some fruit, and sometimes on the toast for a breakfast sandwich.

Hubby likes this idea so much, he uses them too when he cooks breakfast. If we have plain fried eggs, we might add an omelet pack to the skillet with fried potatoes. We have also used them on French Bread Pizza.

You could even put the cooked egg mixture on a warmed tortilla shell, or biscuit for a quick Grab’n’Go Breakfast. 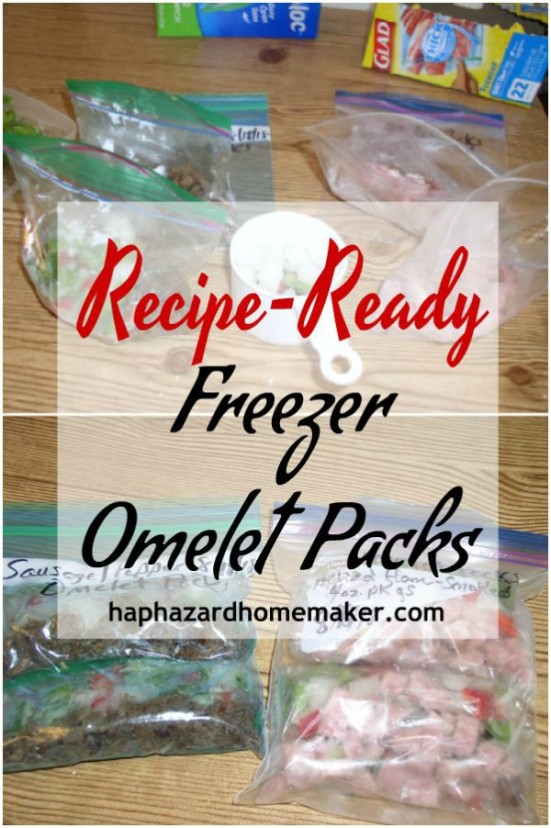 What would you put in a omelet pack for your family?

Leave a Reply to Robin at Haphazard Homemaker Cancel reply