Up through Week 14, I had been posting weekly updates. It was getting kind of redundant, so I decided do bi-weekly updates for a few weeks. It’s actually been a month since my last update, so this is Update #15. I’ve been busy with some other projects and there just wasn’t much to show or tell, other than YES the plants were still alive and growing in containers, plus a few pictures of the harvest.

However, it’s still HOT on the home front, and we still have high HUMIDITY. The humidity is so high, that sometimes it’s difficult to even dry clothes on the line outside. What rain we did get, came in heavy spurts (between 1/2″ and 1 1/2″) on three different occasions, and nothing in between. Too hot and humid for me to be outside, so I haven’t been out for over a week. The garden looks horrible and I’m totally embarrassed by how bad it looks. But it is what it is….

I don’t remember if I mentioned already that greenhouse frame is about 50′ from the back porch. I kind of wish it was closer to the house, so I could more easily tend to it, but I also really like where it’s at and the way it’s set up.

It gets full sun from the crack of dawn until about 3:30 in the afternoon. I love that it’s totally shaded for the rest of the day. The plants get plenty of sunshine and I can work in the shade later in the day!

They are still growing upright, and Hubby hasn’t had any issues with the vines being in his way while mowing. Score one for the thoughtful wife! If the vine and leaf growth are any indication, the sweet potatoes are going to be fantastic! If the potatoes do turn out good, I am going to have to give some serious thought over the winter as to where I could move the containers and use the vines for shading.

Like all of the other tomatoes, these plants look terrible. (They are blooming at the moment though.) It doesn’t help that the plants are always wet from the humidity in the air. I’m pleased that heavy duty clothes rack is working out so well for trellising. I need to add some potting mix to the buckets, apply some fertilizer and then mulch. I’d like to keep these plants going for a couple of more months.

The zucchini and squash plants were pulled out and burned. Lots of squash bugs!

I’m thinking about starting a few seeds in the house, then plant the seedlings in the bean containers in a couple of weeks.

I also want to plant peas in the squash containers, if I can stand the heat long enough to plant.

We pulled the green beans out of two containers last week. The beans in the third container were looking pretty good, so we left those. There were only 3 beans yesterday, so they are slated for removal.

Last week, there was some decent looking foliage and quite a few blooms, so I cut off the bad looking leaves, pulled a few dead plants, then moved some of the vines around to grow on the cage. This week, they are hanging on by a thread. Hope they survive long enough to ripen the few little cantaloupes that are left on the vine.

Nothing huge, but plenty of peppers! Some of them are turning red on the plant. These plants were in dire need of watering, when I took this picture. The forecast has included measurable rain for several days, so we didn’t water. But all we got was a few sprinkles.

I’ve been prepping the larger ones for the freezer. I cut off the ends and remove the seeds, then freeze them whole.

Cucumbers had to go, except for the spindly vine that had a lot of new growth. Figured it was worth a shot for maybe a few more fresh cucumbers. The pack of plants were apparently mis-marked when I bought them, and not the Straight Eight that I had wanted, so I never really got excited about them anyway.

Tomatoes are finally getting some size. The Large Red Cherry Tomatoes (yes, that’s their name) got huge this year! The Beefsteak and the Big Beef are finally starting to produce larger tomatoes, but not near as big as they should be. Between the heavy rains, and lack of watering in between, some of them are cracking badly. I’m thinking next year, we need to put in drip lines on a timer. 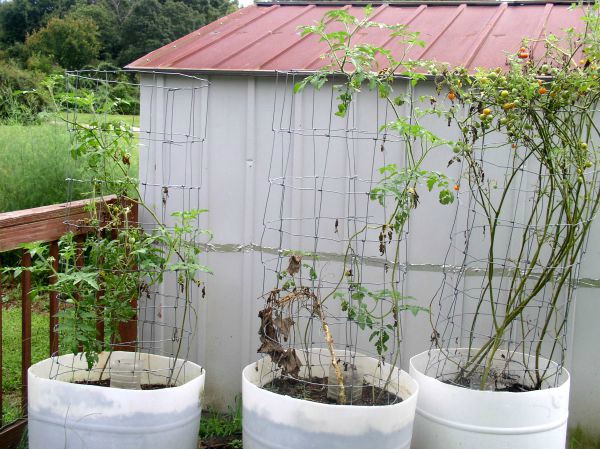 Pulled the dead yellow squash plant, but the zucchini stem had some decent looking leaves and a couple of blooms, so I left it. Trimmed off the dead leaves and stems. Thought it might be a good “bait” plant for the remaining squash bugs. But as you can see, it’s now dead.

Each squash container had two cherry tomato plants in the back. They are pretty spindly because of lack of sun and room. They may or not produce anything. At the time I planted them, I just couldn’t bring myself to compost the extra plants.

The yellow cherry tomato container on the right has been producing plenty of cherry tomatoes for a couple of Fermented Cherry Tomatoes recipes that I had been wanting to make again. They are more orange than yellow. 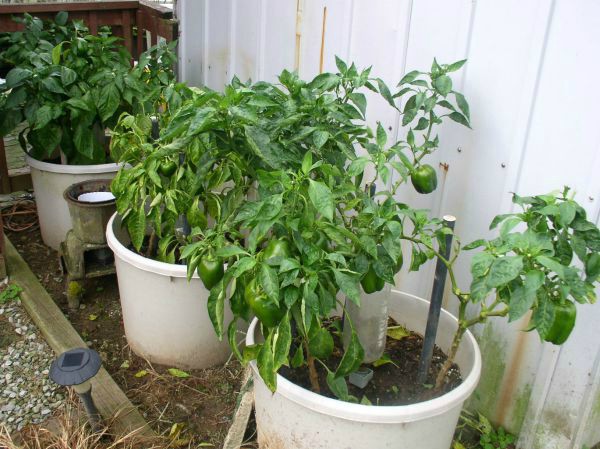 The majority of peppers aren’t getting very big this year, but there sure are lots of them. I did get a few larger ones recently. Actually had three that started turning yellow on the one yellow pepper plant. Also several of the California Wonder peppers started turning red on the other plants. I picked them before they were fully ripe, so that the bugs didn’t ruin it. I am excited about the yellow and red peppers, because they are super expensive in the stores.

Some of the plants were so over- loaded with peppers, that some of the branches started breaking off.

They were all looking terrible, spindly and/or overgrown. I cut them all back. I’ll be moving the perennials to an herb bed sometime after it cools off around here.

I almost hate planting anything in the ground, because we can’t keep up with the weeds anymore.

I wasn’t sure what I wanted to do with this area originally, so I didn’t do anything permanent. I like how it finally started coming together.

Surprisingly, even with neglect, these plants continue to do well. I have drip trays of some sort under all of the pots, so between the rain and the trays, they didn’t die. Next year, I will do a combination with some potted plants, and then plant the perennials and self-seeding planted directly in the ground.

When I set  this area up, I left the plants in containers, because I wasn’t sure about planting anything here. I really like my little shade garden, though, so will start putting plants in the ground in a few weeks. A couple of the hostas along the edge on the right got too much sun, so I know to move them back under the tree. Apparently, they were also a favorite treat of the deer. 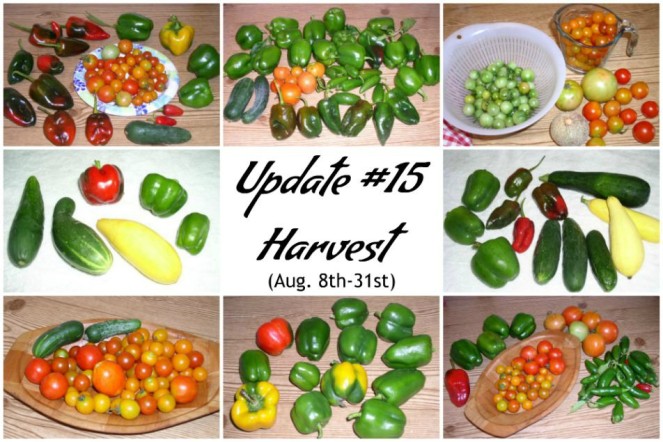 I chose vegetables to grow based on how productive they were. If time, energy or capabilities are a concern, plant vegetables that produce a lot over a long period of time. The fact that they are rich in vitamins is a huge bonus! I can make a lot of dishes with tomatoes, bell peppers, cucumbers and squashes. The hot peppers are also good for many health issues. I may throw something else in the mix, once in awhile, but these are my main ones.

There are other vegetables that I would love to grow (and have in the past), but require too much care for my capabilities now.

Coming to an End

There doesn’t appear to be any relief in sight with the weather, so as much as I hate to, it’s time to put this Container Garden series to rest. If I get a fall garden planted, I’ll post a few pictures and I will continue to post harvest photos this fall. 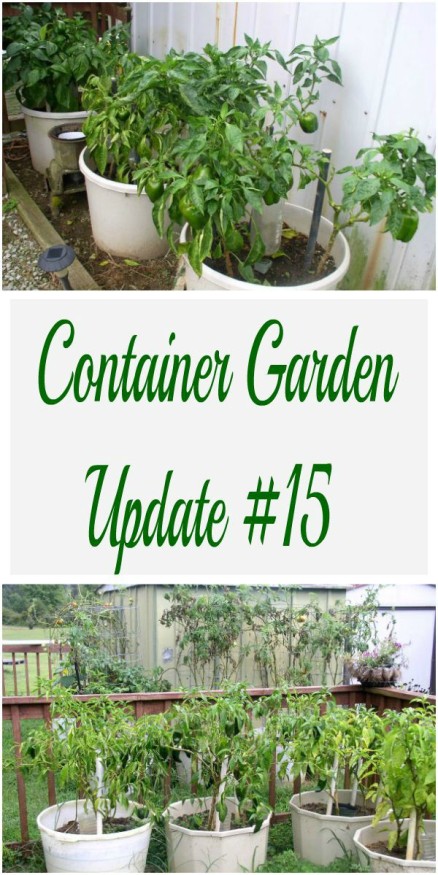 Hope your garden is doing much better than mine!

Thanks to everyone who followed along with the updates!